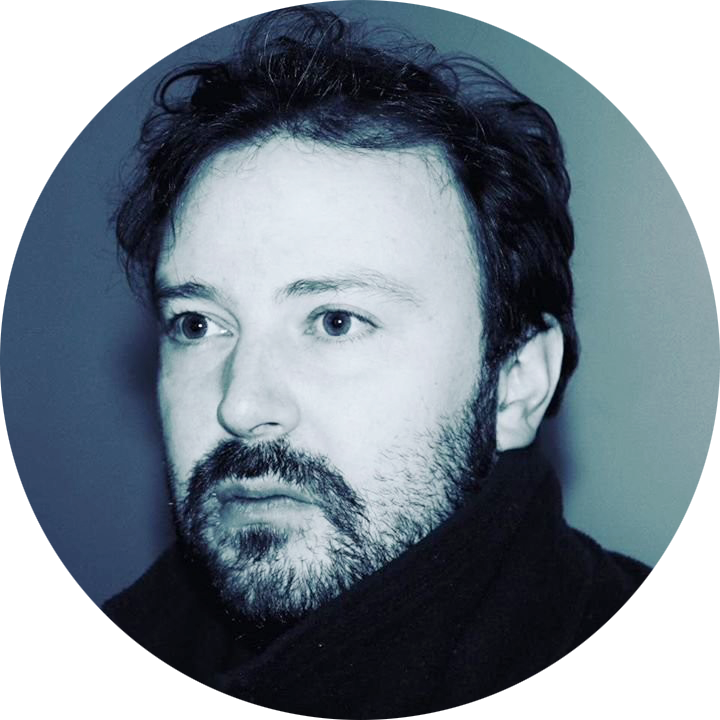 Half-Welsh, half-Mexican and growing up in London, Alex Raphael was surrounded by different influences and interests. But it was always books that spoke to him most and had the greatest impact.

He started writing when at college, where his love of reading evolved into a desire to write, in particular focusing on poetry and short stories. Studying English and American Literature at university meant he took a break from writing, as well as giving him the chance to see more of Mexico on his travels. He concentrated on his journalistic career while working on different writing projects, but his favourite genre of literature has always been short stories as they are what first inspired him to write.

That’s why his first book was The Summer of Madness, a romantic short story that tells of a guy who goes out to try to win his ex-girlfriend back. Will you be rooting for Kurt and his big public gesture or is it more complicated than that and you don’t want her to date him again? Either way you’ll get to know a memorable set of characters along for the ride.

His second book Illusions, Delusions reflects Raphael’s love of alternative short stories from the writers of his childhood and challenges the idea of the narrative. Will your favourite be the story in the form of a questionnaire, a poem or a set of jokes, among the seven very different styles?

Alexander Raphael’s latest offering is Always Never, Rarely Sometimes, featuring original premises and distinctive characters with his trademark imagination, humour and memorable dialogue. Among others, meet a sinister magician with an array of pranks, a long-suffering husband finally becoming more decisive and a group of young guys intrigued by a pretty woman on another table.

The Summer of Madness

Goodreads
 4.33/5
Amazon
 4.7/5
Read reviews
Read reviews
In the summer of love, or rather of madness, a whole set of stories are emerging. But there is one that has got everyone talking. When Kurt decides to win back his ex-girlfriend with the help of a literary classic, he sets off a string of events that will build to a dramatic finale.
Buy paperback book
Buy Kindle Edition

“This is a terrific, romantic short story. It’s something you could download and read on your lunchbreak or even tea you speed-readers out there. It’s well-written, flows beautifully and is peppered with some lovely comedic touches.”

“For such a short story the author manages to portray his characters in a way which makes it easy to empathise with them. The story is short but sweet, engaging and has a great finale. If you’re looking for something to escape into but haven’t got enough time to read a novel this is ideal at just 27 pages long.”

“…consider the freshness of the idea, the clever execution, fluid writing style, and interesting characters… Because this has all of those, betraying an underlying talent for the modern-day fairy tale that makes for a simply delightful read.”

“Raphael tells a story to captivate and spark a keen curiosity in the reader. I found the story thoroughly enjoyable, enticing, and I loved the reference to one of Nietzsche’s powerful quotes. An absolute must read, and a beautifully surprising and unpredictable turn of events unfold.”

“It’s a clever, wry and satirical take on the traditional romance story and packed full of smart literary references. The author’s style brings you into the heart of the action and really sets the scene.”

“The Summer of Madness” was my first book by this author. First thing I did upon finishing: Bought his next book. I loved this story. At times funny, thrilling, and even bittersweet, it kept me turning pages. The language was gorgeous. And we all know a character like the lead, so we can relate to his state of mind and the way he grasps onto hope while trying to win his girl back. How his efforts affect an entire town is a storyline in itself.” 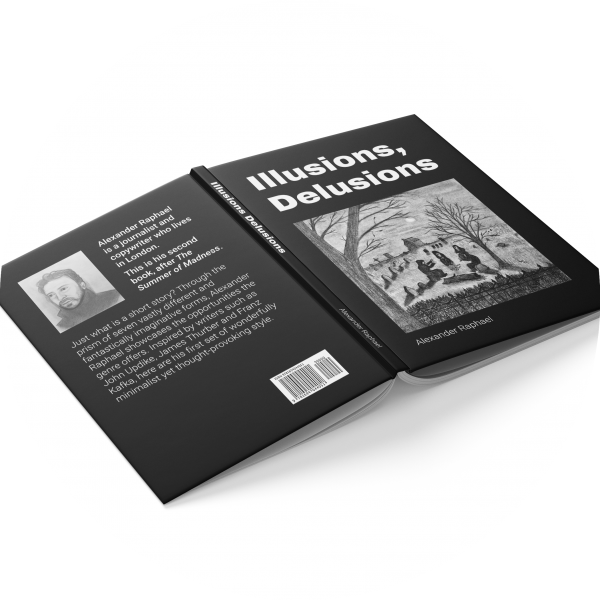 “Great collection! These stories are clever, humorous, thought-provoking, twisted, and delightful! I will not label the stories as only happy or sad, dark or light… I’d say they are as they are – each one outstanding on its own, but as a collection – they are stunning! If you love short stories or need a break from long reads – this book is a must.”

“I really enjoyed reading this collection of short stories. Each one is very unique and presents new and different ideas. Some are fantastical, while others mirror daily life or explore the perspective of a person at the end of their life. To my surprise, I particularly enjoyed the story ‘Death = New Life’, written as a poem. It describes how a lonely man’s selfless act is rewarded with a chance encounter. I do not usually favour poetry over prose, but the style and message of this story resonated with me.”

“Cleverly titled, Illusions, Delusions takes readers on a whirlwind journey through seven stories that all deal with the mind, imagination, and creativity in some way. Raphael really plays with genre and different storytelling techniques in this collection. It’s amazing to explore just how different each story is from the next, and yet they all work wonderfully as a cohesive exploration of, well, illusions and delusions.”

“Within Twilight is my favourite story. Beautiful writing with enchanted tale of human nature. The story voiced the author’s appreciation of art and nature with a touch of fantasy. It’s kind of a story you don’t want it to end and feel sad when it happened… I would recommend this book for the cleverness of the stories and his unique writing style. The book has everything to suit​ your reading preferences.”

“Each of these stories is completely different in style from one another, showcasing the author’s broad range in writing and imagination. Additionally, each tale will incite you to think deeply, look beyond the surface of the story and ask yourself the questions subtly raised within the narrative. What would you do? How would you answer? I enjoyed these unique and clever tales immensely!”

“Illusions, Delusions” is a great little collection of short stories. There is something for everyone, even a poem. While poetry is never my first choice for serious reading, this one’s poignancy and sweetness made it my favorite piece in the assortment. If you like puns, you’ll thoroughly enjoy the story that’s written as a conversation between two friends. Earlier stories showcase the author’s skill with description and maintaining suspense. Wonderful collection.”

Goodreads
 4.4/5
Amazon
 4.5/5
Read reviews
Read reviews
An aspiring magician who gets a sinister pleasure playing all kinds of tricks on those around him. Two strangers running into each after 20 years and wondering what they’ve missed. A long-suffering husband who decides it’s time he started making big decisions. An unhappy child at Christmas struggling to deal with his new surroundings before a wonderfully surprising encounter.
All this and more within the seven stories of Always Never, Rarely Sometimes, where a wide range of characters are forced to challenge long-held beliefs and powerful memories, accompanied by a sprinkling of magic. Always Never, Rarely Sometimes is the third book from Alexander Raphael, following on from his short story The Summer of Madness and his set of conceptual short stories Illusions, Delusions.
Buy paperback book
Buy Kindle Edition

Alfred Joseph was a nice man. The type of man who would lend you his umbrella even if it meant he got sodden wet. The type of guy that would drive miles out of his way to make sure his friends got back ok. Even strangers sometimes. The type who would always bring far more than he needed to when invited to a party, but wouldn’t be annoyed if guests didn’t bring anything when he hosted.
Indeed, he was a legend in the small town for his kindness and generosity. When little Bobby Firman broke his leg and missed out on his trip to Disneyland, Alfred was the one who set up a fundraiser and gave generously himself to make sure Bobby could go when his leg was better. When Alfred’s competitor for the Best Homemade Lemonade was disqualified through an overzealous technicality, Alfred made sure she was reinstated, even though it meant he lost out on the prize. When the town was voted among the least desirable, Alfred used it as motivation to help change its whole perception. He worked harder than anyone cleaning up the parks, scrubbing off graffiti and helping to improve dilapidated buildings. And smiled his way throughout.
People would ask for his advice all the time and he would never mind, even when he was out shopping or in a hurry. He made so much time for everyone that people often joked that he must have more hours in the day than everybody else. It was that same humour that led people to comment that the town’s most popular attraction wasn’t the majestic 40-foot arch by the town hall, but rather the short, bespectacled and much-loved Mr Joseph.
Which made the fact he wanted to kill his wife all the more surprising.

To find out what happens in this story and the rest:

“With a story-telling style (and hints of magic) reminiscent of Ray Bradbury, and populated by darkly flat-affect characters straight out of Patricia Highsmith, this set of short stories is interesting, unusual and intriguingly compelling.”

“Seven short stories, of people very different from each other, in different places in their lives. Seven short stories to realize as a reader that we never know what happens behind the curtains, or just allowing us to be part of a short period in someone’s life. Stories that will surprise you, make you smile, give you hope…”

“Not only do you come across numerous different characters within the various stories but the author shows his range but writing many varied genres. The books moves effortlessly between stories of hope to murder mysteries.”

“The characters and their motives are well-developed so the reader can quickly empathise with them and where they’re coming from and genuinely cares what happens to them. The writer knows how to keep the reader’s attention and there are some clever twists within the plots, although the writer does not rely on this alone to keep the reader entertained.”

“Raphael’s ability to take seemingly normal scenarios and twist them into interesting examinations of human nature is refreshing and the bite sized chunks of fiction are easy enough to read but stay with you long after you’re done. “

“Raphael’s eclectic endeavor is in equal parts humorous and quirky, suspense-filled and heartwarming, philosophical and disturbing – every story striking a chord and lingering long after it has been read. The beauty of the writing lies in how he gets the reader involved in the story, having you decide for yourself what each story means for you.”